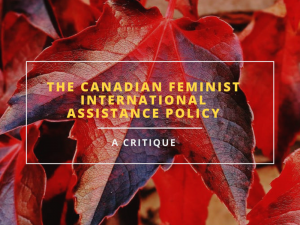 This June, the Liberal government unveiled what it called “Canada’s first feminist international-assistance policy,” with plans to ensure that at least 95%  of the country’s foreign aid would help improve the lives of women and girls through equality and empowerment initiatives. There were, however, no plans to increase foreign aid to fund the new feminist policy.

NDP international development critic Robert Aubin was openly skeptical. “Feminism should not be used as a buzzword or a way to easily brand a political policy. And if you are going to label it as feminist, it must have real substance,” he said in a statement.

It’s not the first time feminism has been used as a branding tool and, obviously, it’s not likely to be the last. Politics aside, the question I want to explore here is, what is the essential spirit of feminism?

On a few occasions, I’ve spoken with like-minded friends and associates about the term ‘feminism.’ During those conversations, I’ve stated that if it was possible to ‘own’ that term, then I would immediately hire a marketing and advertising company and go through a rebranding exercise to incorporate the progressive and inclusive ideas about feminism that have been raised by the next generation. Feminism is more than a single concept or word. It includes activism that is constantly evolving.

Feminism is frequently regarded as static 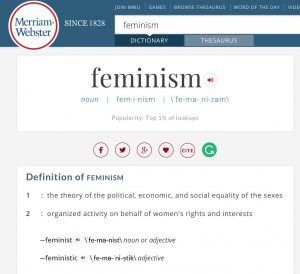 Part of the problem is that most people have differing opinions about what feminism means and/or who it includes. For instance, some people want to exclude others who practice a different religion e.g. a religion that is pro-life, or are pursuing a line of work that they don’t believe qualifies as feminist e.g., cheerleading or modeling.

I believe that feminists also need to respect that other feminists might express their feminism differently than others – without judgment. Some are stuck in the past and are not interested in including other marginalized communities such as women of colour or members of the LGBTQ community. I prefer to include anyone who believes in gender equality. This inclusive version of feminism leads to discussions of the concepts of intersectionality, gender identity, and non-binary being added to the mix. (My understanding of these concepts is pretty basic so I’ve included these links – this shouldn’t be taken as a signal that these concepts deserve less attention.)

Feminism should include everyone

Fair-minded feminism is an inclusive construct that can be illustrated below: 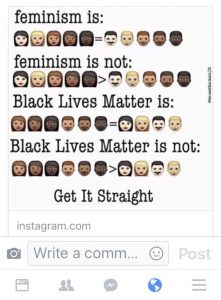 This popular image from Instagram includes Black Lives Matter, and it expresses the idea that feminism is supposed to include equality across all races, ethnicities, religions, etc. But we can’t expect Instagram memes or graphics to do all the heavy lifting and thorough explaining.

In practice, however, feminism has a history of excluding women of colour and women from minority ethnicities – and diminishing their struggles. A recent example comes from the superbly entertaining and popular movie Wonder Woman. The author of the Wonder Woman article notes that women of colour are largely ignored in this feminist-like film, and when they were included, their representation was loaded with stereotypes.

Traditionally, Zonta International (ZI) has not explicitly identified itself as a feminist organization despite the mandate of empowering women worldwide through service and advocacy. ZI was formed after the first wave of feminism when the focus was on voting rights and, at about the time when other unofficial inequalities e.g., pay equity, maternity benefits, etc. were being acknowledged and discussed. I’m no historian so I’ll leave it to Zontians with a much longer tenure and more corporate history to explain.

Depending on how it’s defined, we seem to be in the era of third or perhaps a fourth wave of feminism. Common notions associated with these more modern versions of feminism include intersectionality where the way that women are treated can be better understood in a context of the marginalization of other groups and genders. In this way, feminism is part of a larger consciousness of oppression along with racism, ageism, classism, abelism (discrimination against people with disabilities), and discrimination based on sexual orientation. For more on the various waves of feminism, here’s a start.

It seems to me that we’re dealing with more than deep-rooted resistance towards first, second, and third-wave feminism. Now feminism must redefine and gain acceptance all over again as feminists progress past those established (historical) movements. This is an extremely daunting task when even older forms of feminism were not fully accepted.

With so much debate and variation among people who are comfortable and supportive of these feminist ideas it’s no wonder there is confusion. When you add the voices of people and movements that disagree with the fundamentals of equality in favour of an older, less inclusive status quo then the confusion around the term feminism grows even larger. Since nobody has jurisdiction over the term, it’s a problem that is likely to persist. It’s a good thing that some of us are willing to take important stands and action to advocate for an inclusive version of gender equality regardless of semantics.

This article was written by Dr. Helen Ofosu and the views expressed don’t necessarily reflect the opinions of other members of the Zonta e-Club of Canada1 or Zonta International.